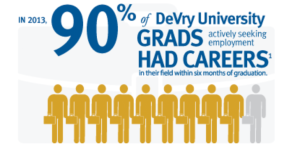 DeVry University is one of the nation’s largest for-profit colleges with nearly $2 billion dollars a year in revenue and over $1 billion dollars in market capitalization.  Now, the government is accusing the school of deceiving consumers about the likelihood of finding a job.

The Federal Trade Commission is suing DeVry for misleading consumers about the employment and earnings of its graduates in numerous radio, television, online and print advertisements with claims that 90 percent of DeVry graduates seeking employment land jobs within six months of graduation.

The complaint alleges that the university falsely counted numerous graduates as working in their field when they were not.  As an example, a student who majored in business was working at a restaurant, while another with a degree in management was working as a rural mail carrier.

According to the complaint, in 2013, five years after its marketing campaign started focusing on the 90% employment statistic, DeVry began telling consumers its graduates had 15 percent higher incomes one year after graduation than all other colleges and universities, even thought the school’s own records showed no meaningful difference to the complaint.

FTC Chairwoman Edith Ramirez told reporters, “Many students incur significant financial expense to improve their employment opportunities upon graduation, so it’s especially important that educational institutions give prospective students the truth about whether their course will help them obtain the jobs that they want.”

If the allegations are true, many of DeVry’s students who have taken out student loans could get debt relief if they have been defrauded.  The Department of Education has indicated it will consider erasing the federal debt of students who can prove a school used illegal or deceptive tactics in violation of state law to persuade them to borrow money for college.  The government has shown it takes this type of fraud seriously, even though debt relief could cost taxpayers hundreds of millions of dollars.

The offer is open to all types of students, but has the greatest effect on those who attended for-profit colleges.  Colleges like ITT Tech, DeVry University, Corinthian College, and Kaplan University are all under government investigation for deceptive advertising and promotion tactics involving graduation and job rates.