Click on this source to sign the petition: The Hershey Company: Say No To Another Generation of Child Slavery In Your Chocolate 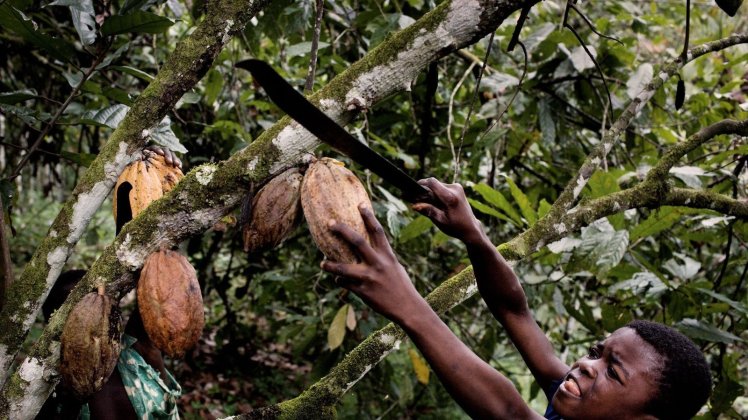 Imagine if your 11-16 year old child was stolen, enslaved, and forced to do hard manual labor 80 to 100 hours a week. This is the plight of over 1 million children working on the cocoa plantations in West Africa. They are paid nothing, receive no education, are under fed, and are often viciously beaten if they try to escape. Most will never see their families again.

What can you do if you are a chocolate lover? Read on, then sign this petition pledging to buy slave-free chocolate. Send a message to the chocolate companies to keep their promise to eradicate child slave labor from their supply chain instead of just kicking the can down the road.

If you are like most chocolate buyers, you will be shocked to know that for decades major and trusted chocolate brands include cacao harvested by child slaves in their supply chains. In 2001, the major chocolate companies promised that by 2005 they would turn away from child labor and certify that they had done so.

When the companies failed to meet their promised 2005 deadline, they renewed their vows to wean themselves off the use of child labor by July, 2008. Then 2010. Another deadline, another broken promise.

Now they have promised “to reduce the worst forms of child labor by 70 percent across the cocoa sectors of Ghana and Côte d’Ivoire by 2020.” The chocolate industy has pledged a whopping $7 million a year meet this promise. Meanwhile, over $600M worth of M&Ms alone are sold each year.

While the chocolate companies make empty promises, the problem has gone from bad to worse. More specifically, a 2015 report by Tulane University found that during the time period from 2013 to 2014, over 1.1 million children in the Ivory Coast were engaged in the most common Worst Forms of Child Labor, hazardous work, including the use of dangerous tools, transport of heavy loads, and exposure to pesticides. This was up from the 791,181 children engaged in such work at the time of the last survey in 2008 to 2009.

Child slavery keeps costs down, which allows major corporations to keep their chocolate cheap. Not only does it cost more to pay laborers a fair wage, but the cost of monitoring the extensive supply chains of global corporations would be significant.

The companies know their behavior is wrong. They claim to prohibit and reject forced labor in their supply chains, yet they know it is rampant and willingly tolerate it. Even as the chocolate companies admit that child labor taints its products, they have spent over a decade and millions of dollars funding their ingenious defenses to various attempts to hold them accountable, while offering nothing for the children. In so doing, these companies have utterly failed an entire generation of West African children on whose backs their profits are made.

The next time you buy chocolate, consider the price thousands of children are paying, most of whom have never tasted chocolate, to bring you your chocolate. The key is in consumer awareness. Consumer dollars send a very clear message to manufacturers about what the public will and will not tolerate. There is no doubt the major chocolate companies with their market power have the leverage to bring an end to this disgraceful practice.

Ethically sourced chocolate is not hard to find. There are several certifications on chocolate labels to indicate a slavery-free supply chain. These include Fair Trade, Equal Exchange, Fairtrade, and Rainforest Alliance (which has an added environmental component — perfect since the chocolate industry is also guilty of devastating rainforests for plantations and production).

Look for a short supply chain. “Bean to bar” producers who own the entire production chain all the way back to the beans and “Direct Trade” producers whose chocolate comes from single, identifiable origins are ideal. Many companies today who proudly list extensive information on the cacao farms they work with on their labels.

Ethically sourced brands can be more expensive than chocolate harvested by slaves, but the extra few cents is worth it every single time. The use of child slave labor in chocolate won’t stop until you stop buying it.

Now that you know, what are you going to do about it? Say “No” to child slave labor in your chocolate.