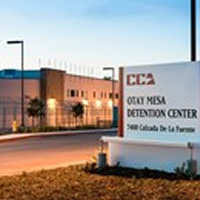 In upholding the Plaintiffs’ trafficking and forced labor claims, Judge Sammartino ruled, “Plaintiffs’ Complaint contains factual allegations, which the Court must accept as true, that go beyond the personal housekeeping tasks listed in the ICE manual. In sum, the Court finds that no reason proffered by Defendant removes its alleged conduct from 18 U.S.C. § 1589’s plain meaning.”

Judge Sammartino went on to say, “Here, Plaintiffs allege a specific punishment (solitary confinement) carried out or threatened to be carried out as a direct consequence for refusing to perform labor. The conduct occurred while Plaintiffs were under the exclusive control of Defendant. Such allegations are sufficient here. In sum, the Court finds that Plaintiffs have sufficiently stated a claim for a TVPA violation.

The attorney representing the Plaintiffs litigating the complaint and opposing the motion to dismiss is sole practitioner Robert Teel.